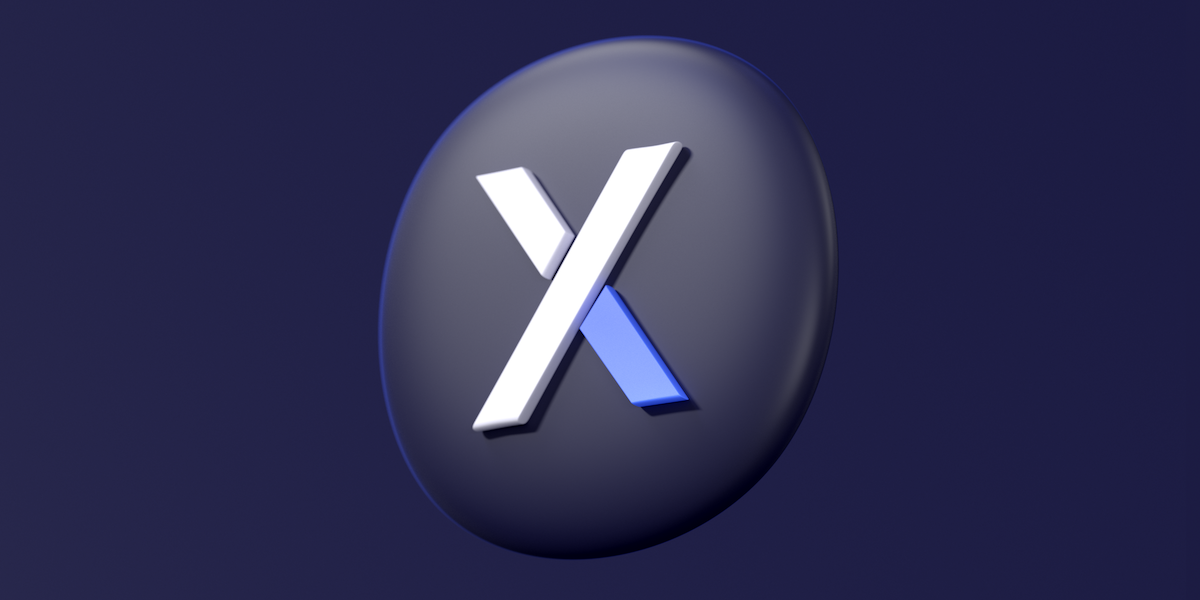 The dYdX protocol token, $DYDX, is now live. The initial distribution will occur over the following 28 days. $DYDX will become transferrable at approximately 15:00 UTC on September 8th, 2021.

$DYDX is not available in the United States or other prohibited jurisdictions. If you are located in, incorporated or otherwise established in, or a resident of the United States of America, you are not permitted to receive a distribution of, or transact in $DYDX. Trading fee discounts are subject to change at the discretion of dYdX Trading, Inc.

dYdX is the market leader in developing trustless & open protocols for advanced crypto-financial products. Over the last three years, dYdX has supported over $11 billion in volume across perpetuals, margin, and spot trading with over 64,000 unique traders, and originated over $250 billion in borrowing & flash transactions from dYdX liquidity pools.

In February of 2021, dYdX and StarkWare launched a Layer 2 protocol for cross-margined perpetuals, based on Starkware's StarkEx scalability engine and dYdX's Perpetuals smart contracts, enabling significant improvements to non-custodial trading at scale. Traders can trade with zero gas costs, and in turn, lower trading fees and reduced minimum trade sizes.

The launch of the dYdX Layer 2 protocol came with a new focus on global growth, outside of the United States. Since launch, the Layer 2 protocol has achieved product-market fit for non-custodial advanced financial services:

With the launch of the dYdX Foundation, the dYdX Layer 2 protocol is now well-positioned for community-led growth & development towards the goal of becoming one of the largest community-controlled cryptoasset exchanges.

With an industry-leading product and a strong trajectory of organic growth, the dYdX Layer 2 protocol is ready for the next phase of its evolution — handing over control to the community through the launch of $DYDX.

A maximum perpetual inflation rate of 2.00% per year will increase the supply of $DYDX beginning after five years, ensuring the community continues to have the resources to continue contributing to the Protocol.

The $DYDX governance token can be earned in one of two ways: rewards from using the Protocol, or through staking $USDC or $DYDX to pools.

All rewards & staking contracts operate on 28-day cycles, referred to as epochs.

On September 8, 2021, eight (8) days after the end of Epoch 0, the initial transfer restrictions will be lifted and approximately 8.11% of the $DYDX supply will become liquid. The following chart shows the total liquid supply over time.

$DYDX has been allocated to historical users of all dYdX protocols based on a snapshot ending July 26, 2021, at 00:00:00 UTC. There are five allocation tiers that depend on the usage across all dYdX protocols. In line with restrictions on the availability of $DYDX and the dYdX Layer 2 protocol in the United States, retroactive mining is not available to users located in, or incorporated or otherwise established in, or a resident of, the United States or any other prohibited jurisdiction. Any accounts that were clearly associated with bot activity speculating on a future airdrop are also excluded from retroactive rewards.

To claim $DYDX, historical users must meet the following milestones on the Layer 2 protocol within the first 28-day epoch, referred to as Epoch 0.

Any historical volume on the dYdX Layer 2 protocol counts towards a user's claim milestone. Any unearned $DYDX at the end of Epoch 0 will be forfeited and automatically distributed to the community treasury.

More details regarding the retroactive mining rewards can be found here.

The Liquidity Staking Pool is now live, and is accessible here. This pool will run until August 3, 2026 at 15:00 UTC.

The Safety Staking Pool will automatically go live on the Protocol at the end of the first epoch, and will be accessible here. This pool will run until September 8, 2026 at 15:00 UTC.

To further liquidity network effects and incentivize professional market makers, $DYDX will be distributed to users who stake $USDC to the Liquidity Staking Pool. Known and community-approved market makers will use the staked $USDC to make markets on the dYdX Layer 2 protocol, furthering liquidity available across the markets. The market makers will not be able to withdraw the $USDC from the Protocol, requiring them to use it only in the Protocol. However, a portion of staked $USDC could be lost if a market maker were to lose funds and be unable to replenish the liquidity staking pool.

Stakers will receive $DYDX, distributed continuously according to each staker’s portion of the total $USDC in the pool. Stakers must request to unstake funds at least 14 days before the end of the epoch in order to be able to withdraw funds after the end of that epoch. If stakers do not request to withdraw, their staked $USDC is rolled over into the next epoch. More details can be found here.

The initial approved market makers include Wintermute, Amber Group, Kronos, Sixtant, and DAT Trading who have been actively market-making on the Layer 2 protocol since launch.

User safety & protection have been of key focus since the launch of the Layer 2 protocol. For this reason, $DYDX will be distributed to users who stake $DYDX to the safety pool to create an additional safety net for users of the Layer 2 protocol. Stakers’ decision to lock $DYDX into the Safety Pool could result in a shortfall event, which may result in the potential slashing of staked funds at the discretion of $DYDX governance. Stakers will receive $DYDX continuously proportional to their portion of the total $DYDX in the pool.

Stakers must request to unstake funds at least 14 days before the end of the epoch in order to be able to withdraw funds after the end of that epoch. If stakers do not request to withdraw, their staked $DYDX is rolled over into the next epoch. The Safety pool will go live upon the $DYDX becoming transferrable on September 8th, 2021 at 15:00 UTC. More details can be found here.

If governance decides to enact perpetual inflation, after 5 years any newly minted $DYDX will vest to the community treasury.

A community-managed treasury opens up a world of possibilities. We hope to see various experiments and initiatives, including ecosystem grants, which can foster the dYdX Layer 2 protocol’s ecosystem growth.

Stockholders, directors, officers, employees, and consultants of dYdX Trading and the dYdX Foundation will be issued $DYDX. All $DYDX distributed to them initially will be subject to contractual agreements off-chain requiring a lockup in which 30% of that $DYDX will unlock in 18 months, 40% will unlock equally from month 19 through month 24, 20% will unlock equally from month 25 through month 36, and 10% will unlock equally from month 37 through month 48. All employees and consultants also will be subject to various vesting schedules that could result in them losing their rights to $DYDX. No employee’s or consultant’s receipt of $DYDX is, or will in the future be, based on providing services related to the dYdX Layer 2 protocol or other services that may benefit the dYdX Layer 2 protocol. Instead, employees and consultants may receive $DYDX for services that benefit only dYdX Trading, the dYdX Foundation or another party.

Although finding ways to coordinate a large group of $DYDX holders is difficult, the $DYDX community should learn from coordination efforts in other communities to further the development and growth of the Layer 2 protocol. While the dYdX Foundation will provide tools to assist with that coordination, the community should not expect it to have a key role in that process.

$DYDX grants holders the right to propose and vote on changes to the Layer 2 protocol. $DYDX governance is based on the AAVE governance contracts, and supports voting based on token holdings.

Proposals must pass a given threshold and percent of yes votes based on the type of proposal. $DYDX tokens can be used to make or vote on governance proposals, or be delegated to other Ethereum addresses.

In the meantime, $DYDX holders will have immediate and irreversible control over:

There are four types of proposals with different parameters that affect the length and execution of a proposal. An executor must validate each type of proposal:

The initial governance parameters are as follows:

All $DYDX holders are responsible for ensuring that governance decisions are made in compliance with applicable laws and regulations. The community is encouraged to consult knowledgeable legal and regulatory professionals before implementing any specific proposal.

Holders of $DYDX receive a trading fee discount based on the size of their current holdings.

Taker fees after all discounts and benefits cannot be lower than 0.05%. dYdX Trading Inc. reserves the right to modify the trading fees discounts at any time. More details can be found here.

All major new smart contracts have been audited by Peckshield. No significant or high priority security issues were found. The core governance & token contracts are forked from the $AAVE governance contracts which were audited by CertiK, Certora, and Peckshield and have been battle tested live on mainnet for months.

Historical users of dYdX can view their past activity and tier for Retroactive Mining in the Rewards section of the Portfolio.

To earn $DYDX, traders are encouraged to use the Protocol here to meet their criteria threshold. You can also stake $USDC to the liquidity staking pool to start earning rewards here. Once available, stake $DYDX to the safety staking pool here.

Set up an account on Commonwealth to start shaping and participating in Protocol governance on the forums. Governance tokens can be delegated and voted with using the governance portal here.

Get yourself a brand new dYdX hoodie or backpack