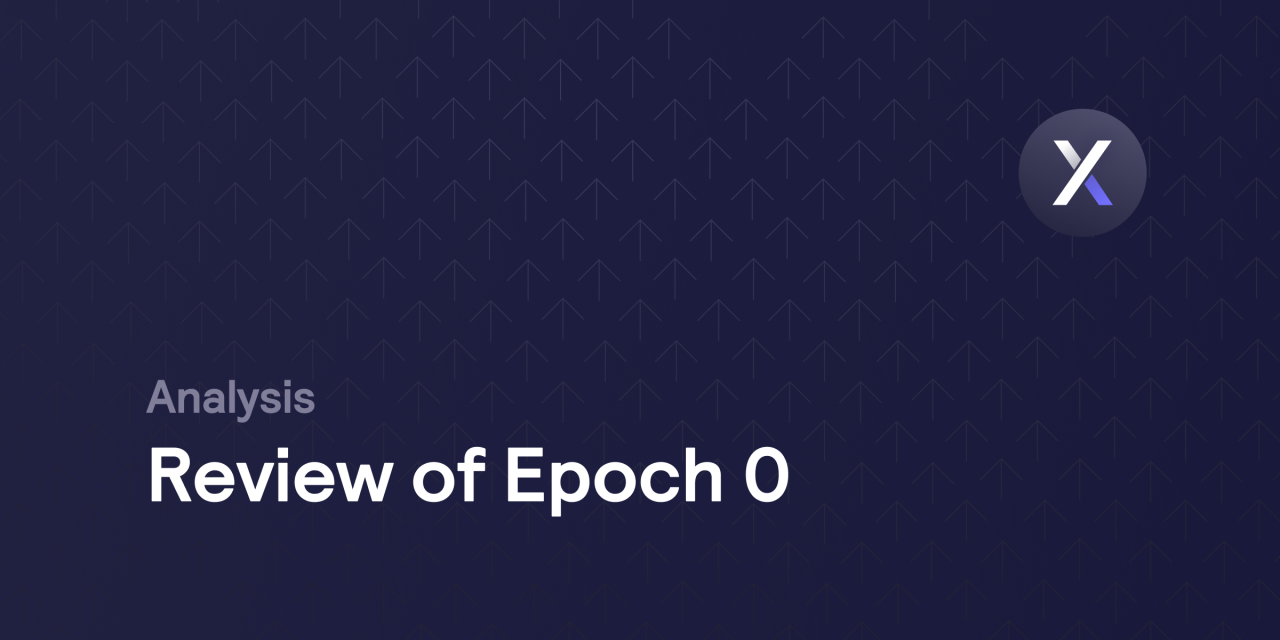 This is the first edition of $DYDX Epoch Review, presenting updates from the $DYDX community and ecosystem. To stay up to date in real-time, join us on Discord, Twitter, and the Forums.

A total of 75,000,000 $DYDX were allocated to past users of dYdX protocols for meeting their corresponding claim milestones on the dYdX Layer 2 Protocol.

Over the course of Epoch 0, 50,309,197 $DYDX were earned and can be claimed by 30,292 users. 24,690,803 $DYDX were not earned. These unearned tokens are irrevocably forfeited and automatically distributed to the Community Treasury.

If users reached their target claim milestone before the end of Epoch 0, they will be able to claim and transfer their earned $DYDX on September 8th, 2021 at 15:00:00 UTC once the Initial Transfer Restriction Period is lifted.

Learn more about the retroactive mining rewards program in the documentation, or our recent blog post.

A total of 3,835,616 $DYDX were earned over the course of Epoch 0, and will be distributed to 20,460 traders. Trading rewards were distributed proportionally based on a formula rewarding both fees paid & average open interest. A breakdown of the adjusted trading activity and corresponding Trading Rewards distribution can be found below. Data is sourced from Foundation Metrics.

On August 29, 2021, the COMP-USD market clearly showed one trader wash trading (~$1.7B) to maximize Trading Rewards. Shortly thereafter, dYdX Foundation requested that dYdX Trading Inc. track and exclude any wash traders on dydx.exchange from the onchain submission of Trading Rewards as of the start of Epoch 0. dYdX Trading Inc. identified 80 Ethereum addresses that conducted clear wash trading during Epoch 0 and removed them from receiving Trading Rewards for Epoch 0. Their fees paid and open interests were also excluded from the Trading Rewards calculations, so other traders were not diluted. Additionally, these addresses were excluded from and potential eligibility for the Liquidity Provider Rewards program for Epoch 1 and their volume was excluded from calculations as well. Learn more about the wash trading incident here.

As an input to the Trading Rewards calculation, users’ fees paid, and average open interest were reset to 0 at the start of Epoch 1.

Learn more about the trading rewards program in our documentation, or our recent blog post.

A total of 1,150,685 $DYDX were earned over the course of Epoch 0 and will be distributed to 5 market makers based on a formula rewarding a combination of uptime, two-sided depth, bid-ask spreads, and the number of markets supported. The following chart displays the rewards distribution by market maker over the course of the epoch. Data is sourced from the Liquidity Providers Rewards Dashboard on Datadog.

You can find maker volume charts on Foundation Metrics to see which addresses did >= 5% of maker volume in a given epoch.

The same 5 addresses did more than => 5% of maker volume in Epoch 0, and thus are eligible to participate in the Liquidity Provider rewards program in Epoch 1.

As an input to the Liquidity Provider Rewards calculation, market maker’s uptime, two-sided depth, bid-ask spreads, and the number of markets supported are reset to 0 at the start of Epoch 1. New market makers providing >=5% of maker volume in Epoch 1 will be eligible to join the pool in Epoch 2. Learn more about the trading rewards program in our documentation, or the recent blog post.

Over $141M was staked to the Liquidity Staking Pool over the course of Epoch 0, from 607 unique accounts. These accounts earned 383,562 $DYDX and distributed pro-rata every second to these stakers. The amount of $USDC staked by addresses at the end of the epoch is as follows.

Data is sourced from Etherscan

We are excited by the amount of capital staked in the Liquidity Staking Pool. The dYdX Trading Inc. team has been working to provide the tooling to facilitate market maker borrowing from the Liquidity Staking Pool. This tooling will become available in Epoch 1. Learn more about the trading rewards program in the documentation, or our recent blog post.

After the Initial Transfer Restriction is lifted, we hope to see the community participate more actively in governance and distribute vested $DYDX on an ongoing basis through contributor grants, community initiatives, liquidity mining, and other programs.

Learn more about the community treasury in the documentation.

Epoch 1 automatically started as soon as Epoch 0 ended. You can start or continue trading or staking to earn rewards for this epoch, which is scheduled to end on September 28, 2021 at 15:00 UTC.

5.57% of the total $DYDX supply (excluding unearned Retroactive Rewards transferred to the Treasury and the $DYDX vested in the Community Treasury) is considered liquid at the end of Epoch 0. These $DYDX tokens will become transferable once the Initial Transfer Restriction Period is lifted.

The Merkle root has been proposed on-chain and the 7-day waiting period has begun. The Merkle tree data, which is a list of (address, reward) pairs, is available here.

Under the hood, the Merkle Distributor smart contract (0x01d3348601968aB85b4bb028979006eac235a588) will distribute $DYDX rewards according to a Merkle tree of balances. The tree will be updated at the end Epoch 0 with each user's cumulative reward balance. An update is performed by setting the proposed Merkle root to the latest value returned by the oracle contract. The proposed Merkle root can be made active after a waiting period has elapsed. During the waiting period, dYdX Governance has the opportunity to freeze the Merkle root, in case the proposed root is incorrect or malicious. Root updates can be unpaused by a ShortTimelockExecutor.

All earned $DYDX can be claimed on September 8th, 2021 at 15:00 UTC once the Initial Transfer Restriction Period is lifted. Once tokens have been claimed, they can be transferred or delegated to dYdX governance.

Stake to the Safety Pool

The Safety Staking pool will automatically go live once the Initial Transfer Restriction Period is lifted. Stakers will earn $DYDX rewards for staking $DYDX. Rewards will be distributed continuously according to each staker’s portion of the total $DYDX in the pool. This pool will run until September 7th, 2026, at approximately 15:00:00 UTC (exact timestamp: 1788793198).

Learn more about the Safety Staking Pool in the documentation.

The team at dYdX Trading, Inc. launched several new features for the exchange.

For more frequent updates, check out the #dev-blog channel on Discord.

dYdX Trading, Inc. launched the EOS (EOS-USD) Perpetual Contract market. Eligible traders outside of the United States can trade $EOS with up to 10x leverage, cross-margining, and zero gas fees.

dYdX Trading, Inc. is working with Hummingbot to distribute $15,000 in prizes to to developers who can help grow the community-driven Hummingbot open-source project, by using the dYdX Perpetuals connector. Learn more here.

Updates from the forum, where longer-form community discussions take place include: